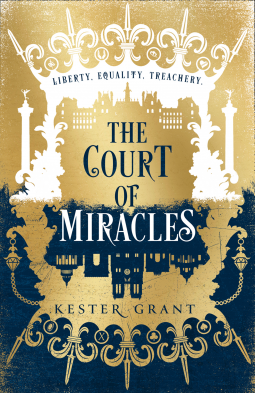 Thanks to Harper Collins UK and NetGalley for the Advance Review Copy in exchange for an honest review.

I’m aware that there has been quite a lot of hype about this book on Book Twitter and other social media and my interest was further piqued when I read the synopsis. You can think about this book as something between a retelling of Les Miserables mixed with a story about post-revolutionary France in an alternate reality where the revolutionaries lost, and the French monarchy is still very much in place…yup. There’s supposed to be some tie in with The Jungle Book too apparently but that passed me by completely.

The main character is the famously friendzoned Eponine, or Nina as she is generally called in this book. She inhabits a Paris split into Daywalkers and Nightwalkers (there is no weird vampire stuff here, don’t worry). Daywalkers are essentially normal people and Nightwalkers have aligned themselves with the dark underbelly of Paris which is made up of a number of different guilds. There is a Thieves Guild, an Assassins Guild, a “Flesh” guild (the sex trade) amongst others. At an early age Nina’s sister is sold off to the Guild of Flesh by her father (who is just as awful in this book as he is in the original novel) so for her own safety, Nina is initiated into the Thieves guild as a child and over time becomes the Black Cat – a master thief.

A lot of the criticism I have seen levelled at this book has to do with the fact that we don’t get to read about Nina’s childhood training in the Thieves Guild and we are supposed to just accept that she is an amazing thief. This wasn’t something that bothered me personally, and I was actually quite glad we didn’t have to have some kind of dull childhood training montage to explain how she became a master thief. She just is, and that’s ok with me.

The setting of 19th century Paris was portrayed really effectively, and it was clear the author had done her research or knows Paris really well. It was fun to imagine an alternate history for some of the most famous Parisian landmarks like the Tuilleries Palace and the Catacombs. I liked the easter eggs and cameos of famous figures from French Revolutionary history which adds another level of interest for anyone who enjoys learning about this period of history.

I also liked the relationships Nina had with the other characters, particularly with Cosette. The romantic entanglements were relatively slow burn and best of all forget love triangles, in this book we get a love SQUARE.

The plot is fast paced with lots of action, excitement and twists and turns. The main antagonist was genuinely disturbing and awful without being completely one dimensional. There were some continuity and timeline errors in the sense that the book mentioned things like Faberge Eggs which were not invented by this period and there were a few other little things like that which niggled a bit to read but no biggie.

This book had interesting characters, a fast-paced plot and I thought the Guild setup was pretty cool although a little confusing sometimes. It is by no means perfect, but I had a hell of a lot of fun reading it and I will definitely be picking up any sequels. There have been quite a lot of French inspired books recently such as Serpent and Dove and Enchantee but this book is definitely one of the better ones.