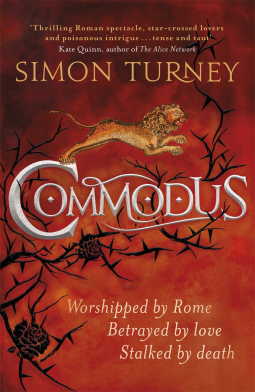 Thanks to Orion and NetGalley for the Advance Review Copy in exchange for an honest review.

It’s not very often that a Classics themed book appears on NetGalley but when they do, I hit that Request button with the power of a thousand fiery suns. I wasn’t familiar with Turney as a writer before reading this novel, but I’ve added Caligula to my Audible wish list on the strength of this novel.

This book is a historical fiction novel about the Emperor Commodus. If you’re like me, you’ll be thinking “the one from Gladiator?” and yes, it’s the same person from Gladiator. Having Joaquin Phoenix in my mind whilst reading wasn’t entirely unpleasant, but it turns out that the makers of that film basically didn’t do any research whatsoever so if you thought he was an utter prat in the film, don’t let that put you off reading this book. He is a much more sympathetic character here.

The story is told from the point of view of Marcia, the Christian daughter of a freedwoman seamstress in the employ of one of the current Emperors of Rome. Marcia goes to live at the palace and spends her childhood with the young Commodus and his family. The story follows Marcia and Commodus as they grow into adulthood and their experiences through this tumultuous period of Rome’s history.

Commodus suffers from his fair share of tragedy and it’s impossible not to feel for him despite some of his behaviour. I imagine everyone you know and love dying horribly will test even the most resilient of people. Marcia serves as his confidante and rock alongside Cleander, a slave, who swiftly becomes Marcia’s nemesis.

I really liked Marcia, I tend to like morally grey female characters and she definitely fits the bill. She understands what parts of her fate she can control, and which she needs to plot her way out of. I didn’t feel her character quite had the nuances of a female perspective that perhaps a female author could offer, but I was willing to let it slide because I enjoyed her characterisation overall.

For being quite a long book, I thought the pacing was good. There were some slower parts but overall, the action moved along quickly. There’s lots of backstabbing, intrigue, betrayal, drama and action sequences but best of all, it is not a military snoozefest. I always hesitate to read historical fiction set in Ancient Rome because military fiction is REALLY not my thing, but this was really more a story about the private wars between individuals which was just peachy.

I really rather enjoyed this one and if you have an interest in the Roman Empire you probably will too. It’s a real page turner and surprisingly juicy and fun without descending into hamminess and parody. I hope Turney will be writing further novels in this series.