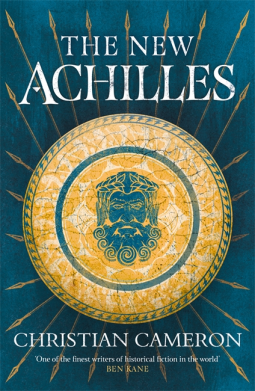 Thanks to Orion Publishing Group and NetGalley for the Advance Review Copy in exchange for an honest review.

To be perfectly honest, this isn’t usually the kind of book I pick up as I’m not super into the sword-and-sandals-with-male-lead genre but, I’m a sucker for anything related to Ancient Greece so I thought I’d give it a whirl.

The story starts by introducing us to Alexanor, an ex-soldier who leaves his past behind to become a Healer at the temple of Epidauros. One day an injured young man, Philipoemen, is brought to the temple. He is “The New Achilles” of the title and plays a key role in the events that follow.

I really liked Alexanor’s character in particular and I found myself getting rather attached to him. It was refreshing to have a quieter, more subtle kind of hero as opposed to the dyed in the wool military types that usually head up these kind of novels. I was also surprised how much I liked some of the female characters that made an appearance. There was more to their characters than simply dying or being raped in order to make the main character feel sad, which is often their fate in similar novels.

In the Foreword for this book it’s mentioned that the author is a military historian. This is clearly apparent throughout the book and the man clearly knows his stuff. Both the battle scenes and observations about life, society and culture are detailed and immersive and the Ancient Greek world has been effectively portrayed. The Glossary at the end was handy too, particularly for military lingo.

I found the narrative quite hard to follow at certain points and I sometimes lost the thread of who was fighting who or who was saying what. Perhaps unsurprisingly there are a LOT of battles in this book and if you aren’t hugely into military stuff then you may find these pages drag a bit. If you are into it, you’ll be in hog heaven. Some of the dialogue also felt a bit too modern sometimes. I personally liked the quieter, character driven parts of the novel best.

Overall, I enjoyed this. An Ancient Greek historical fiction novel with enough detail and charm to elevate it above similar books.

2 thoughts on ““The New Achilles” by Christian Cameron”